Harry Kane sealed a stunning late comeback as England booked their place in the UEFA Nations League semi-finals with a 2-1 victory over Croatia at Wembley. 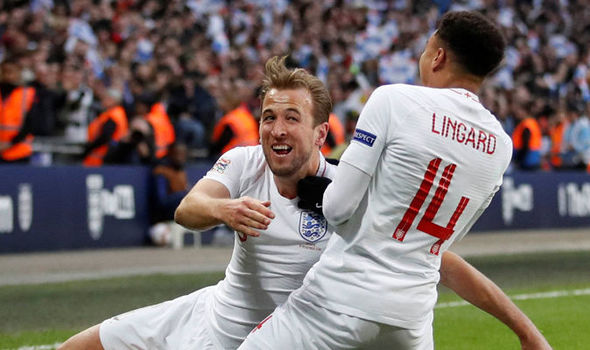 England were staring relegation in the face themselves when Andrej Kramaric opened the scoring to punish the Three Lions for a host of missed first-half chances.

But a dramatic late turnaround sees England finish ahead of Spain at the top of Group A4, with a place in the inaugural Nations League finals secured.

Man of the Match: Harry Kane.

England dominated the first half but only after a defensive scare on three minutes. Jordan Pickford was charged down while clearing a Fabian Delph back pass, presenting Ante Rebic with an open goal, but the Croatia forward blazed over from 18 yards.

The spotlight quickly shifted from Pickford to his counterpart Lovre Kalinic, though, who was confronted by an England barrage.

Raheem Sterling’s near post drive was tipped behind by the Croatia goalkeeper on 12 minutes, and, from the resulting corner, John Stones’ flick fell for Kane, but he fired over from three yards.

The twinkle toes and vision of Delph released Sterling through on goal four minutes later. He was clattered by Kalinic but the ball fell for Kane, who saw a shot cleared off the line by Tin Jedvaj, before Kalinic got back to his feet to block the England captain’s attempted rebound.

Ben Chilwell was next to test Kalinic with a dipping volley from a corner before Ivan Perisic lashed over at the near post, after Kramaric had bundled his way into the area.